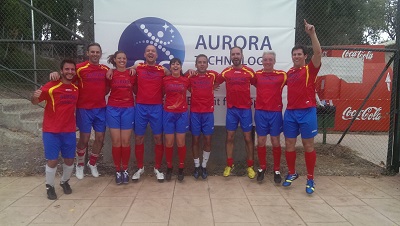 Aurora played the first match kicked off at 11am in a day that lasted until 9pm. Not everyone could commit for a full day, that is why we started with 6 players (at some point Nico and Eduardo from VEGA gave us a hand, or better said, foot).

For our second match against ESA, Nana joined to share the forward position with Virginia our strikers were looking in great shape and full of confidence. Juanma played keeper moving Alejandro to defence. Ruben also joined the defence providing us with the opportunity to substitute. It was a very close match which we drew 2-2.

For the semi-final we played MIX, a team composed of no less than 4 contractor companies, ISDEFE, Rhea, HE space and Serco. Unfortunately we started slowly, probably due to the paella and drinks served in the meantime. We conceded 4 goals in the first half and even demonstrating good team effort in the second half, never managed to get the score on our favour. We ended losing 4-2. Our opponents gained the right to be in the final where they won on penalties against NASA.

For the 3rd and 4th place final, Alex had to leave as he had to fly back to Holland leaving the team with just 8 players. Juanma with a bad finger was replaced in goal by Alejandro. With Alejandro shining in goal the team worked really well together and with a late goal we manage to defeat ESA by 2-1, allowing us to classify with honourable 3rd place.

A great result, a well spent Saturday and an excellent team performance. Thanks to Hugo for organising the Aurora team and to all who participated and came to support.